How North Carolina’s Lumbee Indians defeated the KKK in 1958

“When the meeting began, the arc of the dim light didn’t spread far enough for the Klansmen to see that they were surrounded by as many as a thousand Lumbees. Several young tribe members, some of whom were armed, closed on the Klan meeting and tried to take down the light bulb. The groups fought, and a shotgun blast shattered the light. In the sudden darkness, the Lumbees descended upon the field, yelling and firing guns into the air, scattering the overmatched Klansmen. Some left under police protection while others, including Catfish Cole, simply took to the woods.” 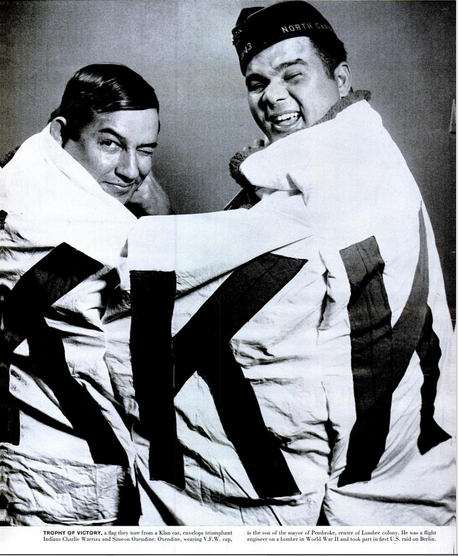 Lumbee Indians with a Ku Klux Klan banner captured from Klansmen who attempted to intimidate the Lumbee tribe, 1958. From the Jan 27, 1958 edition of Life Magazine.